Technology:
Latest Japanese achievements for global environment were released. The grand champion is, of course, Toyota’s fuel cell vehicle “Mirai (the future),” and it is followed by various epoch-making technologies to preserve global environment. Mirai has already received a total of more than 3,000 units by the end of August this year for the domestic market alone. It is priced at about 7 million yen now, though it cost 100 million yen to build a prototype model in 2008. Toyota is scheduled to increase the annual production capacity from 700 units at present to 3,000 units in 2017.

Research Institute for Humanity and Nature developed a technology to increase crop yields by preventing the soil from being eroded. The new technology creates fallow soil about 5 meters wide in the farmland where no seeds are planted and no weeds are eradicated. Because soil and organic substances are blown to the fallow soil, crop yields of the entirely farmland increases by changing the place of the fallow soil every year. The experiment conducted in Niger of Africa, the new technology decreased wind erosion by about 70% and increased crop yields by 30-80%. It does not need much investment, and it greatly contributes to increasing food production in regions suffering from poverty.

Taisei Corporation developed a technology to purify water polluted water of industrial water disposal facilities and industrial effluent treatment facilities with the help of bacteria found in the soil in alliance with Osaka University and Kitasato University. The new technology efficiently dissolves 1,4-Dioxane that is hard to eliminate and supposed to pose a health risk. It can decrease the maintenance cost by 80% and input energy by 60% than the method that uses an oxidant. The experiment to prove the performance of this technology proved that it can maintain the ability to keep the concentration of polluted groundwater at lower than the environmental standard for three months.

Railway Technical Research Institute developed a superconductive cable that can reduce energy consumption by 5%. It succeeded in the test run this year using an existing railway line.

The future society to be realized by superconductive cables

Posted by Senryaku-kenkyu at 12:20 AM No comments:

Technology:
Since the law to purchase renewable energy at a fixed price was enacted in 2012, photovoltaic generation has been growing popular quite rapidly. A solar panel has a life between 20 and 30 years. The Ministry of the Environment estimates that used photovoltaic generation equipment will amount up to 700,000 tons in 2030. A solar battery contains various metals including rare metals like iridium and has the possibility of becoming prospect in the future.

DOWA Holdings has been developing technologies to recover metals like gold, silver, and copper from black ores since the Meiji Period, and it is working on solar panels to establish a technology to recycle them with a view to recovering rare metals. It is urgent and important to establish a recycling technology to eliminate a large amount of used solar panels to be thrown away for land reclamation. Urban mine is a very important source of metals. The Institute of Metal Sciences reckons that urban mine in Japan is estimated to have more than 10% of world’s reserves of such metals as gold, silver, tin, and iridium.

Tantalum, for example, is a rare metal. Mitsui Kinzoku Recycle is developing a technology to recover tantalum from tantalum capacitors in collaboration with National Institute of Advanced Industrial Science and Technology. The technology is to separate capacitors from electronic substrates and recover tantalum at a high purity utilizing the difference of specific gravity. The company is scheduled to start commercial production of tantalum in 2016.

Ricoh and Japan Future Eco-Systems are jointly developing a technology to change waste plastics not to resin materials but to oil. They heat waste plastics to 600-800 degrees centigrade in an iron container, and recover heating oil and heavy oil from vaporized substance. They are in the middle of putting this technology into practical application. Ricoh is receiving inquiries on this technology from Southeast Asian countries and confident of spreading this technology worldwide.

The Japanese domestic recycling market is estimated at 7 trillion yen and supposed to grow further thanks to technological innovation that increases recoverable amount and expands the products subject to recycling.

Posted by Senryaku-kenkyu at 1:28 AM No comments:

No. 144: Building the concept of urban coalfield to help a local government get revenue (November 18, 2013)

Technology:
Toshiba got an order from a local government in the Tokyo metropolitan area for a plant to produce fuel using sludge coming from the sewerage treatment plant jointly with JEF Engineering. Toshiba’s technology eliminates water from sludge and heats the dewatered sludge for 2-3 hours, and produces fuel that has a half amount of energy as coal. Sludge is heated at 160-170 degrees centigrade for one hour to eliminate water in the first stage, and subsequently heated at 400-600 degrees centigrade for one-two hours in the second stage. As fuel for these two stages, Toshiba’s technology uses flammable gases, such as methane and carbon monoxide, and recycles waste heat. Auxiliary fuel, such as city gas and heavy oil, accounts only for several percentages in the fuel used for burning.

The concept of urban coalfield is no longer a dream.

It is possible to produce 80-100 kg of fuel from one ton of sludge. Toshiba’s technology produces fuel that has 60-70% calorie as coal, and the produced fuel can be used for fuel in cement plants and coal-fired thermal power stations. The first plant to be constructed by Toshiba will treat 62,000 tons of dewatered sludge annually. In addition to producing fuel, Toshiba’s technology can reduce carbon dioxide emissions by more than 80% as compared with the existing method that reduces volume of sludge by dewatering and burning.

What is more, Toshiba’s technology will help the local government get revenue by selling the produced fuel. This is the concept of urban coalfield. As of 2010, 78% of sludge is recycled, and 40% of the recycled sludge is used as a raw material of cement and only 1% is recycled as energy. It is expected that fuel equivalent to 1.5 million tons of coals can be produced by utilizing sewage sludge annually in Japan.

Posted by Senryaku-kenkyu at 1:02 AM No comments:

Posted by Senryaku-kenkyu at 12:34 AM No comments:

No. 142: Japanese plan to contribute to reducing greenhouse gas emissions worldwide toward 2050 (August 8, 2013)

The Council for Science and Technology Policy laid down an environmental energy innovation plan to reduce Japan’s CO2 emissions by about 15% from the present level toward 2050 as Japan’s contribution to the reduction of greenhouse gas emissions worldwide to 50% by 2050. The new plan specified the seven major fields for the reduction and set a target value in each field.

The plan will formally be approved at the end of August and submitted to the General Assembly of the United Nations this September and COP19 this November. Japan reviewed the plan for the first time since 2008. The roadmap of the new plan covers 37 fields including the above six fields.

In the innovative structural materials, Japan plans to increase the strength and ductility of steel, magnesium materials, ceramics, and carbon-fiber composites to reduce the weight and production cost of a vehicle. The Council reckons that the spread of these materials as vehicle materials will help the world reduce CO2 emissions by 4.7 billion tons in 2050. In the field of artificial photosynthesis, the government wishes to increase the energy conversion rate by 30 times of the present level to 10% by 2021 through the development of a film that can separate hydrogen from water.

Posted by Senryaku-kenkyu at 10:34 PM No comments:

Technology:
Venture companies specializing in power saving are advancing their competitive edge. Sassor will start to provide retail and restaurant chains with consulting on power saving. They put a special device on the distribution switchboard and measure the operational status of air-conditioners and dishwaters. They analyze collected data on power consumption and use frequency, and display their suggestions automatically on the tablets installed on each outlet. Comparing the operational status of equipment between outlets will help the chain to work out effective measures for power saving. They also plan to draw typical patterns of wasteful spending and submit them to the chain for more effective measures.

PICO ADA provides hospital and hotels with an optimization control service of electricity, gas, and water supply. In these facilities, power is needed to circulate water for kitchens and bathrooms. They save water to reduce power consumption of pumps and adjust the volume of air-conditioners. They forecast hourly change of weather by simulating data from the Meteorological Agency using their self-developed software. Their approach can reduce energy and water supply charges by 15%. A hospital with 300 beds supposedly can reduce expenditure by 10 million yen per year. They offer the equipment and operation support for 4,200,000 yen per year. They collect and analyze data from 1,500 facilities across the country to improve the control program constantly for higher accuracy. 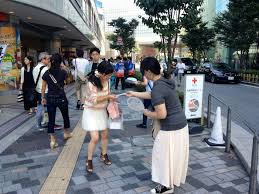 A campaign girl distributes uchiwa (paper fan) to pedestrians
on the street as the easiest and cheapest way of energy saving.

Posted by Senryaku-kenkyu at 9:22 PM No comments:

No. 140: Japanese environmental technology is increasing its presence in Asia and Africa (June 4, 2013)

Business trend:
The Japanese government will reach an agreement with Ethiopia shortly to get an emission quota of carbon dioxide from Ethiopia in exchange for providing it with state-of-the-art environmental technology. The first technology to be transferred to Ethiopia will be the geothermal generation technology. In East Africa, geothermal generation is promising because a great rift zone made up of volcanoes exists. Ethiopia is in urgent need of power source other than hydraulic power generation to cope with rapid growth of economy and population. The Ministry of Economy, Trade and Industry has been assisting Japanese companies in their survey on geothermal generation in this area. The Japanese government is also expected to reach an agreement with Indonesia on Japan’s support for infrastructure improvement. The Ministry of Environment will help Indonesia build waste disposal plants and improve the waster supply and sewerage systems in such large cities as Surabaya.


Potential of geothermal generation
Posted by Senryaku-kenkyu at 5:12 AM No comments: